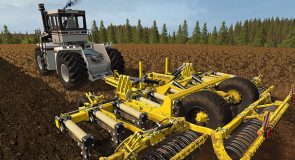 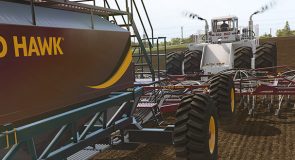 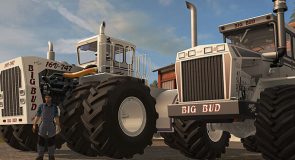 This launch trailer has been filmed on the mod map “American Outback” by somethingonmyshoe2.

GIANTS Software is proud to unleash the “World’s Largest Farm Tractor” to Farming Simulator 17 in the Big Bud Pack! This larger-than-life DLC, giving players access to two Big Bud tractors and 12 pieces of equipment, is now available on PlayStation 4, Xbox One and PC/Mac.

In the Big Bud Pack DLC, players will drive for the first time in a Farming Simulator game the monstrous Big Bud 747 tractor (the World’s Largest Farm Tractor!), its smaller brother the Big Bud 450, and 12 of the most enormous pieces of farming equipment ever made from brands including Bednar, Great Plains, Grégoire-Besson, Seed Hawk and more. These new tools and tractors will allow players to work their fields with incredible speed and efficiency, thanks to a huge working width of up to 25 meters.

Please note that the base game of Farming Simulator 17 is required for players to access this DLC.