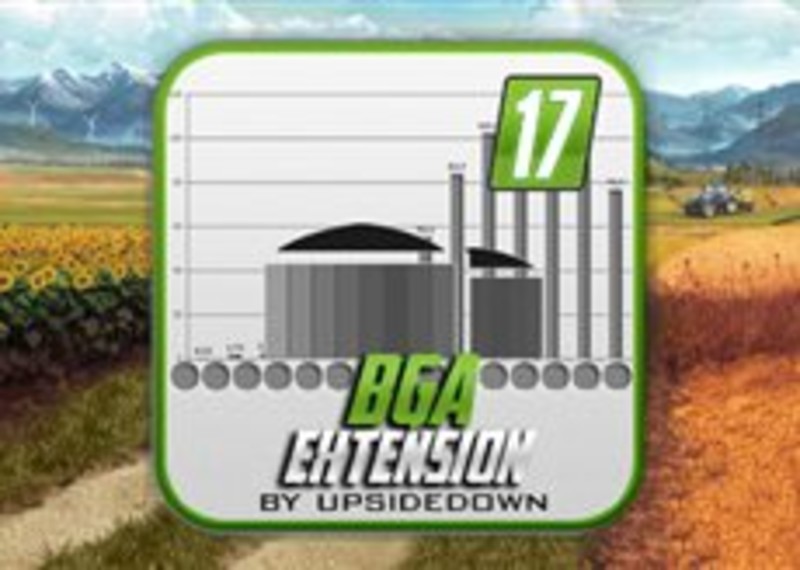 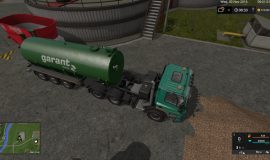 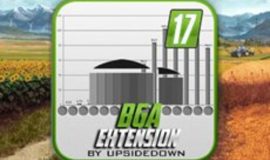 function
With the BGAextension the operation of a biogas plant in the LS is breathed life and realism.

The mod equips the existing biogas plants based on BGAextension level based on the standard script. That is, No changes to the maps are necessary! MP also works naturally.

While the normal BGA (almost) was only a sales point for Silage with a bit of scenery around it, with the BGA extension it becomes a plant, whose operation one should operate with some understanding and planning.

service
The operation and info is carried out at the filling trigger for the fermentations or at the foot of the filling bin. The system is automated in the morning and in the evening by 8 and 20 o’clock each time. The amount you can adjust the bedientrigger within limits. Depending on whether the plant wants to drive efficiently (little feeding -> high degree of rot) or with high throughput (much feeding -> more money per time, but less money per substrate used). The TS content in the fermenter and the current generator output are also shown.

Purchase / commissioning
First you have to put the BGA into operation. This happens in the same places as the operation. Such commissioning is a rather elaborate operation, and effort means money. For this, a lot of the technique has to be done, a bunch of paperwork done and last but not least quite a lot of inoculation material from adjacent BGAs are carted. Long story short: That costs money. And not a little. For this you get a plant, which is already halfway sensibly fed and begun to produce gas.

Before you buy you can choose the plant size. 100% corresponds to a large courtyard. The value you can vary between 50% (small yard) and 300% (corn removal factory). Attention: For installations> 100% the costs increase significantly! In addition, as in the real life, the basic remuneration is slightly reduced and, in addition, no Güllebonus is granted (see below)

The cost of commissioning a 100% plant is € 240,000. This sounds a lot first, but has two reasons: Firstly, you do not throw such a BGA from Jokus, and secondly, such a system produces a certain amount of gas / money even after feeding and starting without further feeding. If the plant has already acquired in the past and it has starved to a “only” then the re-commissioning costs significantly less.
operation

Under the hood is now a model, which simulates the processes in the fermenter. This has a whole series of consequences:
Either one operates the BGA or one does not operate it. All Jubeljahre times ne Schüppe stuff is notchschiss is nich.
Load changes are relatively slow. That is, Just because you double the feeding quantity does not immediately double as much gas (? Electricity? Money). Conversely, the gas production does not stop immediately, as soon as one feeds less or simply leaves a feeding out. Bottom line, therefore, nothing is lost.
The feeding system can be used to operate between relatively lean (low feed rate, high digestion rate: more gas per substrate, thus a better price, but overall low throughput) and high throughput (much feed, less digestion rate: slightly less gas per substrate, however Overall significantly more sales).
The plant accepts different substrates with its own biogas parameters. These parameters can be adjusted by external mods.
In order to conserve the infeed technology, 2 per day is fed in fixed 1h cycles.
The commissioning of a shut down system is a rather expensive and expensive undertaking. In addition, it then also takes a little, until you have such a plant then really clean running. So it should be well thought. A “bischen BGA” is not real. If you wake the dragon you must also feed him;)
Higher operating costs at high TS contents (more own power requirement for agitators and generally more wear).
When the fermentation residue storage is complete, the feeding is switched off. So you have to go somewhere with the stuff.
If the plant is fed too long, the gas production does not come to a standstill. If it is really dead (TS <5%) is only dredging and expensive re-commissioning. No worries: You have to neglect your system for quite some time.
To compensate for the whole trouble: a well running plant brings more yield than the standard maize.
These are almost all points that result from the process model. The core parameter of the model is the TS (dry substance) content in the fermenter. One mixes the substrates of his choice in the bunker. This results in a TS content and a mean gas yield value for the mixture. These are admixed during the feeding to the (very much larger) fermenter. The gas and electricity generation is continuous and the stored dry substance slowly decreases depending on the actual content in the fermenter.

Güllebonus
Just as in the real life, special incentives are created to use economic fertilizers energetically. This is, however, conditional. Thus, the EEG subsidy is only granted for plants up to 500 kWel and a substrate share of manure + dung of at least 30% is required. In BGAextension, this is illustrated by the fact that the Güllebonus is only paid for installations up to 100% size. In addition there is a “Bonussubstrat account”. If your manure or liquid manure is filled, this account is replenished by the substrate in addition to normal feeding. This bonus account is fully filled for three days and as long as it is not completely empty the Güllebonus is granted by + 25% on the electricity yield. How large this account is depends on the size of the plant: The 100% plant is designed for manure consumption for 120 dairy cows. Depending on the structure of the farm, it can make sense to operate a smaller BGA and to use the Güllebonus!

In contrast to the LS15, liquid manure is now pumped on the reworked LS scripts at the filling bin. On the standard maps it is somewhat frigging to hit the trigger, but it goes. The manure is directly pumped into the fermenter and is independent of the (with good reason) limited solids feeding. If you are wondering that when filling the manure, the fill level in the fermentation tank rises: This is because the manure displaces fermenter contents during filling and is perfectly normal.

A few notes on the substrate manure: Due to the relatively low solids content, the amount of manure should be adapted to the plant. If you want to drive your system really fat (clearly> 10% TS), you do not like huge amounts of liquid manure: the thin broth expresses the enormous amount of expensive substrate you just put into the BGA again out of the fermenter . On the other hand, with a very neatly dimensioned swab of manure into the fermenter, the acceleration from the initial 7.5% TS can be accelerated considerably. Since this is quite a real procedure, I have seen no reason to limit the amount of manure that can be filled at once into the fermenter. So you see: a lot of room to tinkle and optimize.

Modding:
The substrates can be modified from (map) scripts with the new function Bga.addBGAfillType () and new ones can be added. This is, of course, particularly interesting for maps with business cycles. Examples include glycerine (biodiesel), pressed cakes (rapeseed oil), grains (bioethanol from wheat, turnips, corn), grains (beer production from barley) or molasses (sugar beet factory). It is also possible to define further liquid substrates and / or güllebonus-compatible substrates.